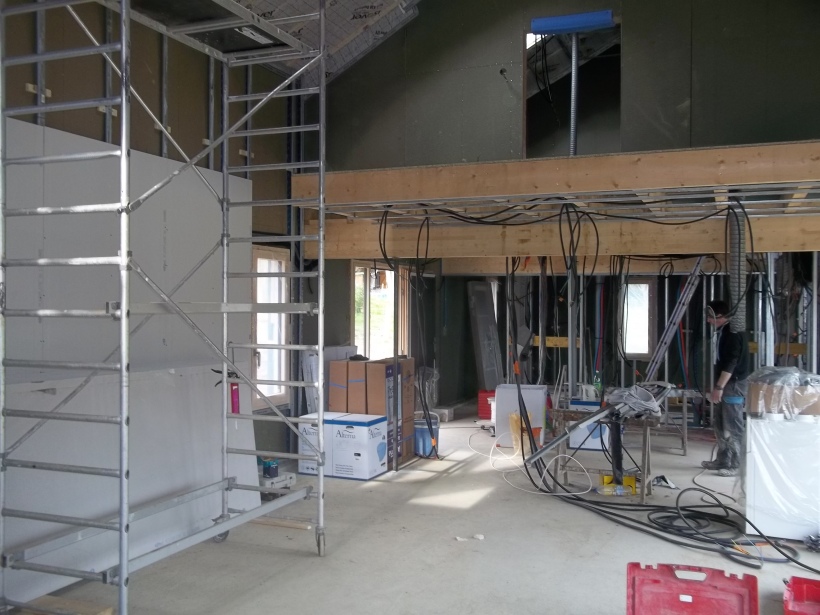 Apologies for the lack of posting recently, but life sort of took over.  Molly started nursery, but was then sick and I was due to go back to work, but then also became ill.  I have just about recovered now and I am recuperating in France! Sadly not in Cannes where most people seem to go for that sort of thing, but La Rochefoucauld is very lovely!

We are also a little behind schedule, but inevitably these things happen.  Unfortunately, not having been on site for six weeks has meant that things have moved more slowly than expected.  Even though we are behind on the program that the builders had given us, the site had changed considerably in 6 weeks.  Externally, the site is looking a lot tidier for a start which makes the approach to the house a lot more welcoming.  This is further helped with the very beginnings of the landscaping. We’d contracted ‘An English Nursery in France’ to plant a hedge for us and to do some tree pruning and the work they did has made a big difference to the front of the house. Hedging plants seem to be very expensive in France.  We were very keen to use our local pépinière, but it would have been cheaper to buy the plants in the UK and drive them over.  This of course, would have not been very good for the plants!

The pergola had also been finished and we were now able to see Tom’s design of a seamless continuation of cladding of the house and pergola in action.  I can’t wait to be sitting there with a glass of pineau watching the sun go down.  I am sure some of you would like to join me!?

West end of house and pergola

North view of house and pergola

However, it is on the inside of the house that the biggest changes have happened.  We now have some walls, ceilings, the beginnings of a staircase and lots and lots of wires, pipes and ducts everywhere.  As I have mentioned before, it is difficult to imagine how the layout of the house will look or gauge the sizes of the rooms from the architect’s drawings. When we were last in the house, before the partitions went up, I could not visualise the space and wondered how we would fit two en-suite bedrooms downstairs.  Visiting the site again, with the partitions up, I can’t believe how large the areas are.  It just goes to show that you really need to see a house with internal walls before you worry about the space!

The framed view is getting there

The walls that have been put up enabled us to see that all important framed view that I had wanted Tom to design right from the beginning of the project.  It was very exciting to finally see it. Hopefully in the next couple of weeks all the walls will be up!

We now have a bit of careful time and project management to work on.  It is also vital that the interaction between our mason, plumber, electrician and main builder works as smoothly as possible. We have to time the delivery of our kitchen correctly because there was no way our mason, who is doing the tiling can do a good job on the tiling with big kitchen boxes in the way!  It is therefore important therefore that the tiling is finished before we take delivery of the kitchen, but this meant that first fix plumbing and electrics had to be finished before the tiling can start.  This organisation of the trades was going to be difficult once back in the UK, so we will have to keep our fingers crossed that until Tom can get back to site things run smoothly with all the trades!

Over to you Franz Ferdinand