Two weeks ago, Tom, Molly and I took a very quick trip to Montemboeuf to see how things were going with the build. Having not seen the house since Easter, I was expecting quite a few changes, and there certainly were.  The biggest change is of course our wall.  It completely changes the look of the house and it was so good to see Stuart’s handy work in the flesh.  I could see why he was so proud of it.  He is clearly a very talented mason.

Unfortunately, while we were there we discovered that after all the time and effort we took choosing tiles, we found out that our floor tiles were no longer being made and so we had to chose from a new set.  We narrowed it down to two, and Molly and Stuart had the deciding votes because Tom and I preferred different ones. 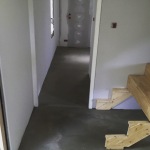 Stuart didn’t waste anytime in starting the work on the screed and the tiling.  Partly because, we couldn’t do anything else in the house before this was done!  The downstairs tiling in practically finished already, which means Bernard and Thromas (our electricians and plumbers) can start with the second fix!  With any luck, the tiling will be finished by the end of next week.  If all goes to plan, Tom may actually have a working kitchen and bathroom when he goes back in July.

Work starts on the terracing

Work starts on the terracing

Stuart also started work on the terrace.  it is apparently in the mid 30 degrees at the moment, very hot weather to be working outdoors. Still better that than on the roof!

On a slightly more annoying note, our doors are still not fixed. Doors and big windows always seem to be a moment of high tension in Grand Designs, and it is with us.  They went in easily enough, but now they don’t really work.  The manufacturers have been out a couple of times to try to fix the problem, but haven’t resolved it yet.  I just hope when they do come again, they fix them and don’t damage the tiling.